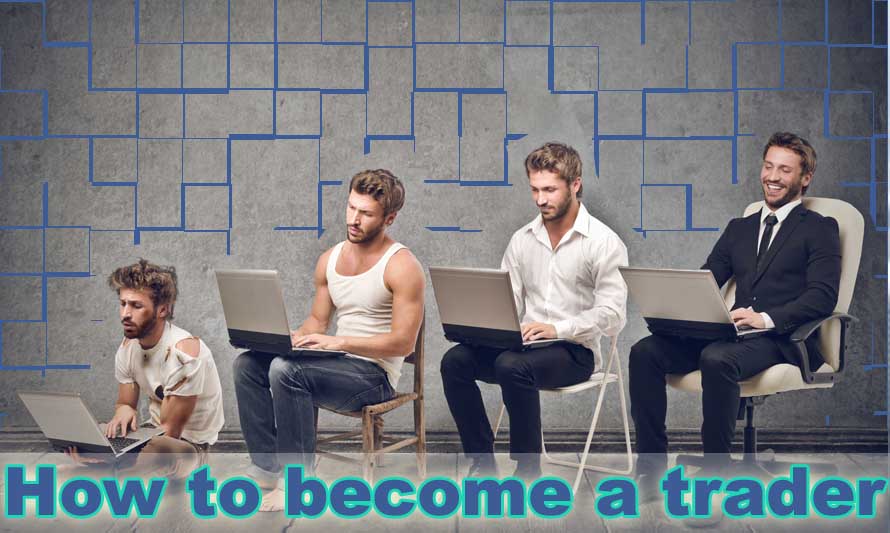 How to become a trader from scratch to a professional PAMM account manager? The answer to this question is simple, but this answer contains some contradictory meanings that this article will help traders to understand.

In a strange way, the notion that becoming a trader is easy has taken root in public opinion. But if trading profitably does not work the first time (since it is easy to learn, as many people think), then this is a divorce and a complete deception. That is, in short, trading is easy. But if it fails to trade - this is a hoax.

Surprisingly, it sits so deep in people's heads that it can almost certainly be assumed, and this is confirmed by the statistics that 99% of newbies drain their deposit and, as a result, completely refuse to trade. And aggressive advertising of brokers and dealing centers plays in the formation of the first part of the statement that learning to trade is easy - the main role. Brokers are interested in having as few successful traders as possible.

And if 99% of traders merge their deposits, then who is trading in the market? And that same 1% of traders who took trading seriously and went through all the stages of becoming a professional trader. A trader is a profession. And a very difficult profession. To master that on the move does not work for anyone.

And how much can a trader earn?
There is an interesting law: "The less people can do what you can do, the more money you can earn on your skills." This law has worked, will work and will always work. And from this law it follows that the earnings of a professional trader are limited only by the amount of deposits that can be served by brokerage companies.

Below you can find out how to become a trader. What stages must each trader go through to become a professional in his field?

Stage 1. The illusion of success.

A person heard somewhere, or read an advertisement of a brokerage company, that traders work without superiors from anywhere in the world and earn crazy money. Naturally, this man decided to become a trader. Most often, he buys, or enrolls (subscribes) to some training courses. Newbie to get acquainted with the basic terms. Studies the operation of trading terminals. It takes its first steps in trade. Opens and closes positions without a clear trading algorithm. And ... earns the first profit. This is the most dangerous moment for the trader! It may seem that the trade is mastered and everything was not so difficult.

The trader's earnings depend on the size of the deposit. And it would be complete madness at this stage to increase the deposit at the expense of credit and borrowed funds. Some newcomers, after closing the first profitable deals, sell apartments and thus increase working capital.

This first stage is characterized by a complete lack of understanding of what is actually happening. Market analysis and transactions superficial. Entries to the market and closing deals are not systemic. After losing trades, the psychological burden on the trader is enormous. If you do not work on stabilizing your mental state, stress arises and nervousness arises, sleep disappears.

After receiving the first losses, traders begin to suspect something. He analyzes his transactions, compares opening and closing orders with the price movement on the chart, and suddenly he is horrified to realize that he does not understand anything in the market! This is the key moment when most newbies make an erroneous conclusion about the market that this is a scam and leaves the market forever. As mentioned above - these "traders" 99%.

The remaining 1% begin, almost literally, to nibble at the granite of the science of trading. They re-read the mountains of literature (which in the end turns out to be useless). They are registered on forums and in groups in order to get more information about trading. They buy various trading systems and strategies and put everything into practice. They study the work of advisers, indicators, auxiliary programs for trading. Some, especially persistent, even master the programming language mql4 (mql5) and themselves write Forex robots for automated trading. This is a very long stage.

And only when, according to the second law of dialectics, there is a transition of quantitative changes into qualitative ones, when a huge amount of information has been processed and assimilated, all this has been worked out in practice, a trader suddenly becomes enlightened with his own idea of ​​profitable trading.

This second stage is characterized by the great intellectual work done by the trader to systematize everything and create their own trading system. This can only people with a stable psyche and increased efficiency. Lazy and capricious by this time already dropped out.

The trader profitably trades according to his trading algorithm, but the internal voltage is still present. There is also an unpleasant aftertaste from planned, but still unprofitable transactions. And suddenly at one fine moment it becomes clear that no one can predict the price movement on the chart. It is simply impossible. And it comes to the realization that all these analytical centers, which spread their analytical forecasts, are absolutely meaningless and exist for the "traders" from the first stage and ... at the expense of the same "traders". Analysts are a useless army of people whose recommendations have not yet made anyone a millionaire. Awareness of this fact explodes the brain from the inside and the whole mechanism of fooling and fooling huge masses of people becomes clear. The magnitude of this institutionalized fraud is simply amazing.

This third stage is characterized by the transition of the trader to the next level of trade, where trade is absolutely unemotional and with a clear awareness and understanding of their actions on the price movement in one direction or another.

The trader continues to trade according to his system, strictly adheres to each point of his trading algorithm. In the process of such trade comes routine and automatism. A trader no longer needs to spend hours to analyze the market before entering and exiting the market. Everything becomes clear and understandable. And if there is a desire to get big earnings, the trader goes into the status of managing trader with a PAMM account and accepts money from investors.

This fourth stage is characterized by a calm, unemotional trade with increased profits.

Becoming a professional trader is hard work. And only goal-oriented, strong people with an inner core are capable of it. But it's worth it.

If you are trading Forex, then you are definitely at some of the stages described above, your career as a trader. Which? Report it in the comments and clarify the characteristics of each stage, as you see it.

Found a typo? Please select it and press «Ctrl + Enter»